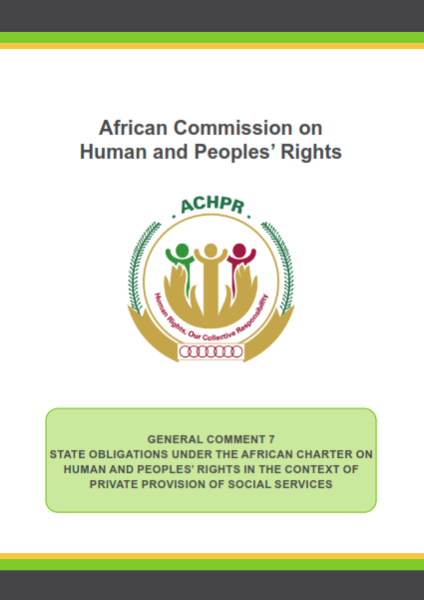 In Resolution 420, the Commission noted with concern that instead of improving access to economic, social and cultural rights, many private actors were increasingly contributing to the ‘low level of enjoyment’ of these rights on the continent. Later, the Commission adopted Resolution 434, mandating the Working Group on Economic Social and Cultural Rights (Working Group) to develop norms to address this problem. Resolution 434, adopted just seven days before the World Health Organisation declared SARS-CoV-2 (COVID-19) an official pandemic, could not have arrived at a more appropriate time. In the months that followed, Africa saw the full effects of the pandemic, which were exacerbated by decades of underinvestment in public social services on the continent.

In light of these developments, this General Comment reflects many months of research and debate over the Commission’s jurisprudence, its existing soft-law standards, and recent state practice on the continent. In carrying out its task, the Working Group was supported by five partners: the Centre for Human Rights, University of Pretoria; the Dullah Omar Institute, University of the Western Cape; the Global Initiative for Economic, Social and Cultural Rights (GI-ESCR); the Initiative for Social and Economic Rights (ISER), the Open Society Foundation, and the Right to Education Initiative (RTEI). The Commission could not be more grateful for their invaluable contributions.

The Commission adopted this General Comment on 28 July 2022, during its 72nd Ordinary Session, held virtually.

Theme of the year